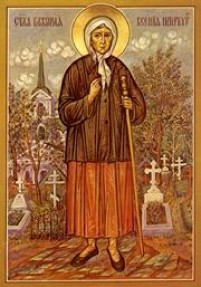 Saint Xenia was a woman who gave away everything – her house, her money, her possessions, and even her name – who wandered homeless, and who has helped people resolve desperate situations ever since. She lived during the eighteenth century.

The wife of Colonel Andrei Feodorovich Petrov, who served as a court chorister, Xenia fell into great grief upon the death of her husband when she was 26 years old. Appearing to have lost her mind from her grief, Xenia distributed her possessions to the poor. Her relatives complained to the authorities. After speaking to Xenia, the officials were convinced that she was in her right mind and was entitled to dispose of her property as she saw fit.  Dressed only in the clothes of her husband she wandered the streets of St Petersburg among the paupers. She called herself by her husband’s name: Andrei Feodorovich. Her life was centered on God, seeking protection and comfort only in Him. The basis for this way of life is found in the first Epistle to the Corinthians. During the nights, she refused refuge and went into the fields where she prayed through the nights.

Xenia left Petersburg for eight years. It is believed that she visited the holy elders and ascetics throughout Russia seeking instruction in the spiritual life. St. Xenia eventually returned to Petersburg, where she was mocked and insulted because of her strange behavior.

When relatives of Xenia tried to help her with necessities she replied , “I do not need anything.” The people of St. Petersburg came to love her as she placed the Kingdom of Heaven before earthly possessions. The people considered her presence in their homes as a good sign. Her acceptance of services and bread from merchants, however small, brought them great sales as their customers, who loved the saintly Xenia, frequented those who helped her.

Xenia possessed the gift of clairvoyance. She foretold the deaths of the Empress Elizabeth, in 1761, and of the imprisoned John IV Antonovich, the great-great-grandson of Tsar Alexis, in 1764. After her death her grave became a place of pilgrimage. Portions of the dirt from her grave brought healing for many of the pilgrims.

As a saint, she is noted for her intercessions in helping those with employment, marriage, the homeless, for fires, for missing children, and for a spouse.