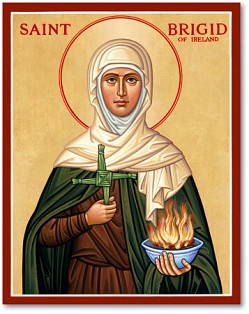 2. She was a disciple of St. Patrick, who baptized her parents, then her.

3. Brigid’s father was a pagan and married Brigid’s mother, a slave.

4. As a young child Brigid had compassion for the poor, giving away food and clothing and even her father’s possessions to the poor.

5. There are many miracles attributed to St. Brigid (I’ve read up to 46!) that happened while she was living.

6. Brigid was a beautiful girl and her father wanted her to marry King of Ulster.

7. At age 16, St. Brigid wanted Jesus Christ to be her spouse and she prayed that He would make her unattractive so no one would want to marry her.

8.  Her prayer was answered when St. Brigid lost an eye and then was allowed to enter a monastery.

9. Miraculously, when St. Brigid took the veil she was healed.

11. Outside of Dublin she received possession of a plain called Curragh.

12. There she built herself a cell under a large oak tree, called Kill-dara, or Cell of the oak.

14. Today’s cathedral city of Kildare is named from this monastery.

15. St. Brigid drove out demons by simply gesturing the sign of the cross.

16. There is a well-known miracle story about St. Brigid and her cloak.

17. She was looking for land for her community and King Leinster refused her request.

18. St. Brigid persevered so she then asked for as much land as her cloak would cover.

19.  The King thought surely she was playing a joke since her cloak was so small.

20. So the King didn’t hesitate to agree to her unconventional request.

21.  Miraculously, when she laid down her cloak it covered acres of land.

22. A popular way to celebrate St. Brigid’s feast day is by making a St. Brigid cross.

23.  The story of her cross originated when St. Brigid was teaching a dying pagan chieftain about Christianity.

24.  While her head was bowed, she picked up the rushes off the ground and began braiding them into a cross

25. Rushes were a common floor material in Irish homes.

26. The chieftain asked Brigid about the cross and its meaning.

27. He (the chieftain) converted to Christianity and was baptized before his death.

“Brid agus Muire dhuit,” (Brigid and Mary be with you) is a common Irish greeting.

28. Brigid once fell asleep during St. Patrick’s sermon. He found it humorous and forgave her with a smile.

29. Brigid was buried in Kildare Cathedral and an expensive tomb was placed over her.

30. About the year 878, because of the Scandinavian raids, the relics of St. Brigid were taken to Downpatrick, where they were interred in the tomb of St. Patrick and St. Columba.