In his most famous exploit, Nicholas aided a poor man who had three daughters, but could not afford a proper dowry for them. This meant that they would remain unmarried and probably, in absence of any other possible employment, would have to become prostitutes. Even if they did not, unmarried maidens in those days would have been assumed as being a prostitute. Hearing of the girls’ plight, Nicholas decided to help them, but being too modest to help the family in public (or to save them the humiliation of accepting charity), he went to the house under the cover of night and threw three purses (one for each daughter) filled with gold coins through the window opening into the house.

One version has him throwing one purse for three consecutive nights. Another has him throwing the purses over a period of three years, each time the night before one of the daughters comes of age. Invariably, the third time the father lies in wait, trying to discover the identity of their benefactor. In one version the father confronts the saint, only to have Nicholas say it is not him he should thank, but God alone. In another version, Nicholas learns of the poor man’s plan and drops the third bag down the chimney instead; a variant holds that the daughter had washed her stockings that evening and hung them over the embers to dry, and that the bag of gold fell into the stocking.

Saint Nicholas (15 March 270 – 6 December 343), also called Nikolaos of Myra, was a historic 4th-century Christian saint and Greek Bishop of Myra, in Asia Minor (modern-day Demre, Turkey). Because of the many miracles attributed to his intercession, he is also known as Nikolaos the Wonderworker.  His reputation evolved among the faithful, as was common for early Christian saints, and his legendary habit of secret gift-giving gave rise to the traditional model of Santa Claus through Sinterklaas.

The historical Saint Nicholas is commemorated and revered among far more Christian sects than just Orthodox Christians. The Anglican, Lutheran, and Catholic Churches revere him. In addition, some Baptist, Methodist, Presbyterian, and other Reformed churches have been named in honor of Saint Nicholas. Saint Nicholas is the patron saint of sailors, merchants, archers, repentant thieves, children, brewers, pawnbrokers and students in various cities and countries around Europe.

The historical Saint Nicholas, as known from strict history: He was born at Patara, Lycia in Asia Minor (now Turkey). In his youth he made a pilgrimage to Egypt and the Palestine area. Shortly after his return he became Bishop of Myra and was later cast into prison during the persecution of Diocletian. He was released after the accession of Constantine and was present at the Council of Nicaea. In 1087, Italian merchants took his body from Myra, bringing it to Bari in Italy.

Nicholas was born in Asia Minor (Greek Anatolia in present-day Turkey) in the Roman Empire, to a Greek family during the third century in the city of Patara (Lycia et Pamphylia), a port on the Mediterranean Sea. He lived in Myra, Lycia (part of modern-day Demre), at a time when the region was Greek in its heritage, culture, and outlook and politically part of the Roman diocese of Asia. He was the only son of wealthy Christian parents named Epiphanius and Johanna. He was very religious from an early age and according to legend, Nicholas was said to have rigorously observed the canonical fasts of Wednesdays and Fridays. His wealthy parents died in an epidemic while Nicholas was still young and he was raised by his uncle—also named Nicholas—who was the bishop of Patara. He tonsured the young Nicholas as a reader and later ordained him a presbyter (priest).

In the year AD 305, several monks from Anatolia in Asia Minor came to the Holy Land to Beit Jala, Judea and established a small monastery with a church named in honor of the Great Martyr George (Saint George). This was before St. Sava’s Monastery was founded in the desert east of Bethlehem on the Kidron Gorge near the Dead Sea. These monks lived on the mountain overlooking Bethlehem in a few caves. In the years 312–315, St. Nicholas lived there and came as a pilgrim to visit the Holy Sepulchre, Golgotha, Bethlehem, and many other sites in the Holy Land. The Saint Nicholas Greek Orthodox Church is located on the site of his cave in Beit Jala where today there are innumerable stories about Nicholas still handed down from generation to generation. A text written in his own hand is still in the care of the Greek Orthodox Patriarch of Jerusalem. In 317 he returned to Asia Minor and was soon thereafter consecrated bishop in Myra. 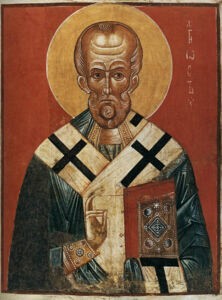 In 325, he was one of many bishops to answer the request of Constantine and appear at the First Council of Nicaea; the 151st attendee was listed as “Nicholas of Myra of Lycia”. There, Nicholas was a staunch anti-Arian, defender of the Orthodox Christian position, and one of the bishops who signed the Nicene Creed. Tradition has it that he became so angry with the heretic Arius during the Council that he struck him in the face.

The modern city of Demre, Turkey is built near the ruins of the saint’s hometown of ancient Myra, and attracts many Russian tourists as St. Nicholas is a very popular Orthodox saint. Restoration of Saint Nicholas’ original church is currently underway, with the Ministry of Culture and Tourism in 2007 permitting Divine Liturgy to be celebrated at the site, and contributing 40,000 Turkish lira to the project.

A solemn bronze statue of the saint by Russian sculptor Gregory Pototsky was donated by the Russian government in 2000, and was given a prominent place in the square fronting the medieval Church of St. Nicholas. In 2005, mayor Süleyman Topçu had the statue replaced by a red-suited plastic Santa Claus statue, because he wanted an image more recognizable to foreign visitors. Protests from the Russian government against this were successful, and the bronze statue was returned (albeit without its original high pedestal) to a corner nearer the church.

In 1993, a grave was found on the small Turkish island of Gemile, east of Rhodes, which historians believe is the original tomb of Saint Nicholas. On 28 December 2009, the Turkish government announced that it would be formally requesting the return of Saint Nicholas’s skeletal remains to Turkey from the Italian government. Turkish authorities have asserted that Saint Nicholas himself desired to be buried at his episcopal town, and that his remains were illegally removed from his homeland.

An Irish tradition states that the relics of Saint Nicholas are also reputed to have been stolen from Myra by local Norman crusading knights in the 12th century and buried near Thomastown, County Kilkenny, where a stone slab marks the site locally believed to be his grave. This is not widely accepted beyond local tradition.

Miracles and other stories

Numerous stories, some miraculous, are told about Nicholas. One tells how during a terrible famine, a malicious butcher lured three little children into his house, where he killed them, placing their remains in a barrel to cure, planning to sell them off as ham. Nicholas, visiting the region to care for the hungry, not only saw through the butcher’s horrific crime but also resurrected the three boys from the barrel by his prayers. Another version of this story, possibly formed around the 11th century, claims that the butcher’s victims were instead three clerks who wished to stay the night. The man murdered them, and was advised by his wife to dispose of them by turning them into meat pies. The saint saw through this and brought the men back to life.

According to another story, during a great famine that Myra experienced in 311–312, a ship was in the port at anchor, loaded with wheat for the Emperor in Constantinople. Nicholas invited the sailors to unload a part of the wheat to help in the time of need. The sailors at first disliked the request because the wheat had to be weighed accurately and delivered to the Emperor. Only when Nicholas promised them that they would not suffer any loss for their consideration, the sailors agreed. When they arrived later in the capital, they made a surprising find: the weight of the load had not changed, although the wheat removed in Myra was enough for two full years and could even be used for sowing.

While yet a young man, Nicholas followed the example of his uncle, the abbot, by making a pilgrimage to the birthplace of Christianity—the Holy Land. Desiring a serene time of preparation, Nicholas set sail on an Egyptian ship where the other pilgrims did not know who he was. The first night he dreamed a storm would put them all at peril. When he awoke in the morning, he warned the sailors that a severe storm was coming, but they need not fear, for “God will protect us.” Almost immediately the sky darkened and strong winds roared round the ship. The wind and waves made it impossible to keep the ship under control. Even with lowered sails, the sailors feared for their very lives and begged Nicholas to pray for safety. One sailor climbed the main mast, tightening the ropes so the mast would not crash onto the deck. As he was coming back down, the sailor slipped, fell to the deck, and was killed. While Nicholas prayed, the storm did quiet, relieving the sailors. Their comfort, however, was dampened by grief over their comrade’s death. As Nicholas prayed over the dead sailor, he was revived, “as if he had only been asleep.” The man awakened without pain and the ship finished the journey to the Holy Land. Nicholas then embarked on his pilgrimage to the holy places, walking where Jesus had walked.

One night while staying with a family in Jerusalem, he wanted to pray at the only church remaining in Jerusalem at that time. It was the Church of the Room of the Last Supper on Mount Zion. As he approached the heavy, locked doors, they swung open of their own accord, allowing him to enter the church. Nicholas fell to the ground in thanksgiving.

The stories with the most likely historical basis are the stories of Nicholas helping three girls and stories of Nicholas coming to the aid of sailors. Others, especially that of the three murdered children, are much later additions to Nicholas lore, historian Dr. Adam English concludes in a new biography of Nicholas for Baylor University Press (The Saint Who Would be Santa Claus) based on a four-year study of current historical research into Nicholas.