Recently, the  Orthodox Church commemorated one of my favorite saints, Saint Maria Skobtsova of Paris a twentieth century saint who devoted her life to serving the poor and the marginalized. She was one of the great saints of the last century and her life story is very inspirational for modern Christians. Not only was she a brilliant theologian who lived her faith bravely throughout the beginnings of Soviet Russia and World War II, finally dying a martyr’s death at the Ravensbruck concentration camp in Germany in 1945, but she was also a wonderful poet and artist. For Orthodox Christians, who desire to truly live by Christ’s commandments, her life serves as a beautiful example of the calling we are called to: to love God and to love others. The life of Saint Maria of Paris teaches us that not only is it important to have faith that moves mountains but that we must strive to see (in St. Maria’s own words)  that “Each person is the very icon of God incarnate in the world.”

Saint Maria was born Elizaveta Pilenko in 1891 in Riga, Latvia to devout Russian Orthodox parents. Her father died when she was fourteen, and her grief led her to atheism. As a young teenager she became involved in the socialist and intellectual circles in St. Petersburg. By eighteen she was a published poet and married to a Bolshevik. Her desire to actively serve the needy – more than simply discuss social change – led her back to a faith in Christ. She then became the first woman accepted to study at the Theological Academy of the Alexander Nevsky Monastery in St. Petersburg.

After the Bolshevik Revolution, she was elected Mayor of Anapa but had to flee Russia for Paris in 1923. Elizaveta was inspired to devote her life completely to serving the poor after her daughter, Nastia, died of meningitis in 1926. After her second marriage ended in 1932, Metropolitan Evlogii of Paris tonsured her a nun with the name Maria and blessed her to live a “monasticism in the world” devoted to social service. She found herself devoted to the Russian emigres in Paris, she founded a sanatorium along with homes to serve single mothers, families, and single men. By 1937, 120 dinners were served each day. Much of the work she did herself: begging for food, cooking the soup, and even embroidering the icons for their chapel.

By 1942, Maria’s work turned to assisting the Jewish population. She helped Father Dimitri Klepinin issue fake baptismal certificates for Jews that came to their aid. In a mass arrest in July of that year, 12,884 Jews were taken to a sports stadium before being transferred to Auschwitz. Maria spent three days visiting the prisoners, bringing them food, and even rescuing some of the children by smuggling them out in trash cans. She also aided Jews in escaping to Southern France which was unoccupied by the Nazis.

Sent to Ravensbruck: Maria was arrested in February 1943, and was sent to Ravensbruck concentration camp in Germany. For two years, she ministered to her fellow prisoners, helping them remember their human dignity. She led discussion groups on literature, history, and theology, despite her weakening health. On March 31, 1945, a short time before the camp was rescued, Saint Maria was taken to the gas chambers; some prisoners say she took the place of a fellow Jewish prisoner.

On January 18th, 2004, the Holy Synod of the Ecumenical Patriarchate recognized Mother Maria Skobtsova as a saint along with her three fellow workers who also died in German concentration camps: her son Yuri, Fr. Dimitri Klepinin, and Ilya Fondaminsky. They are all commemorated in the Orthodox Church on July 20th.

As noted, Mother Maria’s credo was: “Each person is the very icon of God incarnate in the world.” With this recognition came the need to accept this awesome revelation of God unconditionally, to venerate the image of God in her brothers and sisters. After all, this is the Great Commandment: [37] Jesus said unto him, Thou shalt love the Lord thy God with all thy heart, and with all thy soul, and with all thy mind. [38] This is the first and great commandment. [39] And the second is like unto it, Thou shalt love thy neighbour as thyself. [40] On these two commandments hang all the law and the prophets. (Matt.22 Verses 34 to 40). Saint Maria truly loved both God and her neighbors.

A Deep Connection: Many  Orthodox Christians feel a deep connection to Saint Maria of Paris because of her radical love for Christ and by extension her radical love for others. I do too. Perhaps it is because I share some similarities to her life story?  Like Mother Maria of Paris, I  tend to run in intellectual and artistic circles (I even went to art school!). I occasionally suffer from depression ( “I get very depressed” Saint Maria once admitted). Like Saint Maria of Paris, I used to be an atheist.  And I have a desire to serve the poor and the marginalized (in fact, the social work of Reconciliation Services in Kansas City, MO. is partly what attracted me to the Orthodox Church). Many people my age, who sought out authentic Christianity for years and finally found the Orthodox Church, feel similarly about Saint Maria of Paris. Saint Maria of Paris’ story is so inspiring because she wasn’t afraid to meet people where they’re at – and that means sharing life with the “paupers and the tramps.” This is as authentic as it gets.

And I personally love how “unusual” she was.  Here is an impression by Metropolitan Anthony of what Mother Maria was like:

“She was a very unusual nun in her behavior and her manners. I was simply staggered when I saw her for the first time in monastic clothes. I was walking along the Boulevard Montparnasse and I saw: in front of a café, on the pavement, there was a table, on the table was a glass of beer and behind the glass was sitting a Russian nun in full monastic robes. I looked at her and decided that I would never go near that woman. I was young then and held extreme views.” What this passage highlights is Mother Maria’s humanity. She may have been a nun but she still could enjoy a nice glass of beer! We often think of saints as these otherworldly figures but what this impression reveals, is the saints are like you and me. I know it might sound silly but it’s stories like this that gives me hope for my salvation and that through the Church I am being changed.

And yet I don’t often feel changed. I sometimes feel that we come to Church, take communion, and it doesn’t really open our eyes and hearts. We just go about our daily lives and ignore others as if they are invisible. We judge others and we refuse to offer assistance. I know I am extremely guilty of this (forgive me!). And of course, modern life is so distracting! What is great about the life of Saint Maria of Paris is that her witness reminds us that our love for God and the Eucharist does transform us – if we allow it to. And this transformation allows us to see one another anew – as icons. The Divine Liturgy allows us to go out into the world as witnesses of the Kingdom primarily by transforming us into spiritual beings capable of love.

Now, not all of us can become monastics like Saint Maria of Paris, but we can certainly strive to care for those we encounter on a daily basis. To follow the Great Commandment, for many of us, starts with where we are: by loving God, and our spouse, our fellow parishioners, our co-workers, and offering assistance to that stranger we meet on the street.

Pray to Saint Maria of Paris for her to intercede on your behalf, and you’ll find ways to love others more fully. I’m positive about this. In a world that is so divisive, we need to be able to see others as icons of God and not as our enemies. And I pray that we are able to do so.

“No amount of thought will ever result in any greater formulation than the three words, ‘Love one another,’ so long as it is love to the end and without exceptions.” – Saint Maria of Paris

If you need to assist individuals experiencing homelessness, you can use this resource: https://handbookofhelp.org/

To learn more about Mother Maria of Paris, check out this book: Pearl of Great Price: The Life of Mother Maria Skobtsova, 1891-1945, available in the St. Seraphim of Sarov Bookstore. 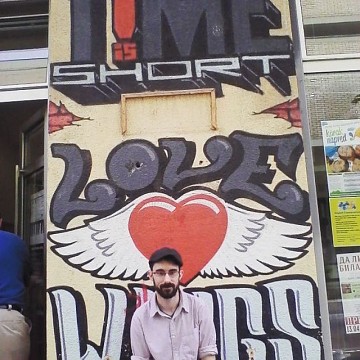