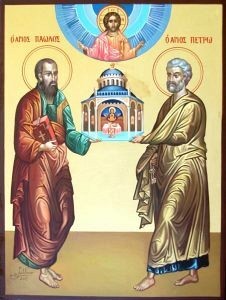 In America the Fast of the Apostles is probably the least well known, but is among the oldest of Christian traditions. It is mentioned by St. Athanasius in the fourth century, and there are other testimonies to its existence very early in the history of the Church. The fast ends with the observance of the Feast of Sts. Peter and Paul on Monday, July 12.

Following Jesus’ admonition recorded by St. Matthew, the Apostles left behind their parents, their children, and their possessions in order to bring the Good News of Jesus Christ to people who did not know Him. Christian missionaries around the world are still doing this today. During the Fast of the Apostles we are reminded to pray for them all, and for Orthodox mission everywhere.

The Fast is also an occasion to remember that in Christ, we have a unity that goes far beyond our personal opinions, likes or dislikes. The Acts of the Apostles tells us that the Apostles themselves recognized this very early. The occasion was an argument which took place regarding whether the followers of Christ needed to continue to observe the Law of Moses. At first, Peter and Paul took different sides in the discussion.

Both Peter and Paul were Jews, but their personalities and backgrounds were very different. Peter, who was formerly a fisherman, was among the first of the disciples to follow Jesus. Presumably he was uneducated and probably spoke only Aramaic in the local Galilean dialect. Paul, on the other hand, was very well educated under Gamaliel, the most famous rabbi (teacher) of his time, and spoke several languages.

Moreover, Paul—originally named Saul—was not among the Twelve Disciples. He even led a deadly persecution of Christians until he received an astounding vision of Christ while on the way to Damascus (Acts 9). The blinding vision changed his life forever. Thereafter he became an ardent witness to the risen Christ. But because of his former life, it was very difficult at first for the disciples to forgive and accept him.

Before very long, Peter and Paul became involved in the dispute about keeping the Law. Paul, who was preaching among Gentiles, taught that it was no longer necessary to keep the Law, because the purpose of the Law was to point to the death and resurrection of Christ. Paul even proclaimed that the Law had been nailed to the cross with Christ, for now we are justified by faith and not by following the Law (see Romans 10 and Galatians 3). Peter, however, was drawn towards the opinion of some Jews that although Jesus was indeed the promised Messiah, the Law nevertheless should continue to be observed for all time.

Paul journeyed to Jerusalem to meet with Peter and the other disciples in order to settle the matter. Paul says that he opposed Peter to his face (Galatians 2:11 ff.). After some discussion it was agreed that Christians would no longer follow the Law, including practices like circumcision and the complex dietary laws given in the Books of Moses. However, they would continue to observe some of the restrictions of the Law regarding moral principles, and the eating of blood.

It is significant that Peter did not simply decide to agree with Paul on these matters. Rather, he was given a vision from God in which it was declared that foods which were formerly declared to be “unclean” for all Jews, were now “clean” or acceptable (Acts 10). Thus, Peter realized that God was instituting a new order and way of life, and that to agree with Paul was a matter of obedience to Christ himself.

These events remind us to seek God when we have disagreements within the Church. This requires humility on our part, and the willingness to accept others even when we might not have agreed with them before. We let go of our own personal wishes or demands, and pray for the good of the Church and for a recognition of the will of God for all of us together.

At the conclusion of the Fast, therefore, we celebrate Peter and Paul together. The icon of the Feast depicts the two men standing side-by-side, holding the Church together in their hands. This is a powerful symbol of the supernatural love for one another which is given by the Holy Spirit. In the Holy Spirit we have agreement and new life. For this reason, Orthodox Christians today can regard the Fast of the Apostles as one of the most important times of the year, a time to humble ourselves and pray for genuine love and unity in the Church around the world.

Source: What is the Apostles Fast? | A Russian Orthodox Church Website (pravmir.com)