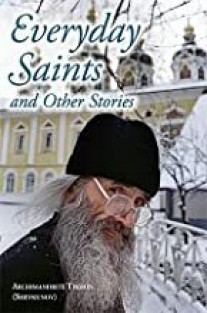 A book review by Randy Hay

Have you ever wondered what would happen if an Orthodox book managed to cross over to the mainstream market…and reveal our strange world in which fact is often stranger than literary fiction?  What if The Gurus, the Young Man, and Elder Paisios or Father Arseny skyrocketed up the New York Times bestsellers list?   Aren’t books like these really more fascinating than the latest best-selling novel?

Well, that’s what’s seems to have happened in Russia with the appearance of Everyday Saints and Other Stories in 2011, written by Archimandrite Tikhon Shevkunov, abbot of the Sretensky Monastery in Moscow.  According to the cover of the English translation it has sold a million hard copies – and several million e-book copies!  It was the 2012 Book of the Year in Russia, and its publisher boasts that it is the best-selling book since the fall of Communism.  Thus far over 340 Amazon readers are giving it a five star rating.

There are so many ways in which this book is significant it’s hard to know where to begin.

First off, I suppose, is its appeal—if the back cover can be believed—not only to Orthodox, but also to non-Orthodox … including atheists.  I tend to believe that it has such a broad appeal, since we are all created with an innate desire for the “elfland” of God’s kingdom on earth (as  G.K. Chesterton put it), and Archimandrite Tikhon portrays this startling realm so well.

While the book is some 500 pages long, the author presents most of his material in the form of short narratives.  These vignettes, which were written in the few spare moments given an abbot, are not in chronological order … or any particular order (at least until the last portion of the book, which is devoted to the interrelated stories of several monks, the last of whom died in a tragic automobile accident).

The center of the book is the Pskov monastery, where Fr. Tikhon began his monastic life in 1982.  It dates from the 14th century; it was in Estonia till that region was annexed by the Soviet Union.  This remarkable cenobium was the only monastery in the USSR that was never closed during the Communist era.

Pskov was originally located in an enormous series of caves.  While the monastery later expanded  above ground, the caves are still used as a cemetery; some 14,000 monks, clergy and laity are reposed there.  A most remarkable property of these caves is that decomposing bodies never smell!  Coffins are not buried in the caves; they are simply stacked in nooks and grottoes, yet the air in the caves is as fresh and sweet as can be.  (In the Roman catacombs, contrariwise, the stench of decay could only be tolerated briefly.)

This phenomenon is fascinating, and was apparently perplexing to the authorities of the atheist USSR.  Later President Boris Yeltsin himself visited the caves, and marveled.

The author describes a visit to these caves, in which some monks explored a long-neglected section and came across the intact body of an abbot who had reposed hundreds of years before.  Aside from being covered with dust from his decayed vestments, this unknown saint was so incorrupt that it seemed he had just fallen asleep.

One of the most notable figures in the monastery during the Communist era was Archimandrite Alipius, who became known as the “Great Abbot.”  He was a decorated veteran of WWII, and completely fearless of government persecution.  Year after year officials came to close the pesky monastery, and year after year he foiled their plans, using every means at his disposal.  This astonishing monk—who was known as kind and loving to all the faithful—repulsed the Soviet authorities through such seemingly-impossible means as verbal intimidation, threats of legal action, and even hints at armed resistance!

Truly, the grace of God was with him.

This historical material is not only fascinating in itself, but sorely needed as the American and Russian media ignore the fearful persecution of the Church during the Communist era.

What was it like to be an Orthodox believer in the Krushchev years, or a monk in the following decades?  How were services conducted?  How did some hermits manage to hide themselves from the government?  The answers to many such questions may be found as one peruses fascinating story after story.

– An especially appealing account for American Orthodox is the discovering of the relics of St. Tikhon, Patriarch of Russia and Enlightener of America.  When he reposed in 1925, he was #1 on the government’s list of dangerous people; he died under suspicious circumstances, and the faithful had known if he was cremated by the Bolsheviks or hidden in some unlikely place.

I won’t give the remarkable story away … suffice it to say that the discovery involved a tailor, a living patriarch, and a church fire. And note, the author himself was involved with the search for St. Tikhon.

Perhaps the most colorful character portrayed by the author is Fr. Nathaniel, the monastery treasurer.  He dealt with anyone threatening even the tiniest bit of the monks’ funds by assuming bizarrely obnoxious behavior.  The author seems to take particular delight in relating stories about this monastic, and a closeup of his face adorns the cover of the book.

Fr. Nathaniel was known as “difficult” not only by his fellow monks and the KGB…but by his own abbot, local citizens and even dissidents.  Meanwhile, he wore ragged clothes, dispensed profound advice to anyone who would ask such a lunatic, and took the greatest care to protect the spiritual lives of his brothers.

I could cite any number of memorable stories from this book; but the reader must discover them for himself.

I am certainly pleased by the speed with which Everyday Saints was translated into English and published.  In fact, since I began writing this review it has come out in Kindle e-book format!  Hopefully, this trend will continue.

Will there be a flood similar books published in Russia, now that this one has been so successful?  In the West, certainly, any new genre will have a multitude of imitations right behind it.

Randy Hay is a sub-deacon at Joy of All Who Sorrow. He is an Occupational Therapist by day and an author by night. His published novels are From Liz to Eternity and Paradise on the Hoof. Both are romantic comedies with a heavy emphasis on comedy. Read more about Randy in a previous blog at Randy Hay (joyofallwhosorrow-indy.org).

Everyday Saints and Other Stories is available in our bookstore, which is now open again on Sunday after our services in addition to its regular weekday hours.