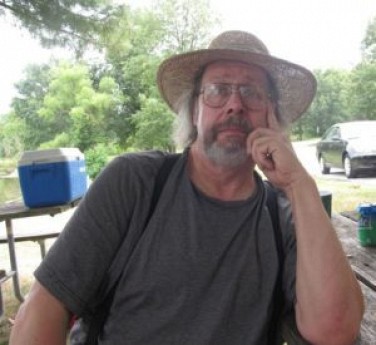 You might not have ever met him, but he has been a volunteer worker in the St. Seraphim Bookstore since 1996 (that’s 23 years for the mathematically challenged).Meet David-Thaddeus Estes, born in Champagne Illinois on April 21, 1955. He was the first of three brothers and two sisters. His Dad was a farmer who raised dairy cows, chickens, sheep, pigs, corn, soybeans, clover, and wheat. His mom was a homemaker. The family attended the Methodist Church, but David says there was not much Biblical teaching there. As long as he can remember he “just wanted to know God.”

David went to Fisher Elementary and High graduating in 1974. David’s first job was a paper route when he was 13 – 14 years old. In high school he worked for the Pioneer Seed Company. His job was to detassel corn, a process that enables the proper cross pollination between male and female corn plants, which results in seed corn. See https://davesgarden.com/guides/articles/view/4341/ for a more thorough explanation. Between his Junior and Senior years of high school, David worked at M&W Gear Company. After he graduated, he worked at Flo-Con Systems.

David attended Lincoln Christian College where he worked as a librarian assistant. He later moved to the Hammond – Gary Indiana area to be part of the Evangelical Orthodox Church. He went to work at Montgomery Ward and later at Inland Steel. He attended Purdue University – Calumet finishing eight credits in Biology, which completed his requirements for a BA in Ministry from Lincoln Christian College.

As a college graduate Thaddeus went to work for Inland Steel Company. He was in an engineering apprenticeship program, which combined work with further education at Prairie State College. His studies combined General Education with Mechanical Engineering Education. Inland Steel had a number of layoffs and Thaddeus got caught in more than one. He moved to Indianapolis to be part of the Holy Trinity Evangelical Orthodox Church. In Indy he worked at the Indianapolis Public School System.

The focus of Thaddeus’s life has always been to know God. To this end Thaddeus has studied the Nicene Creed, the writings of the church fathers, and St. John Chrysostom’s liturgy. He also participated in a catechetical school learning about the church and theology.

John Michael Talbot’s music was a strong influence on Thaddeus who attended his concerts and lectures. Thaddeus also participated in an intercessors’ group where he became familiar with many books that furthered his knowledge. These included The Orthodox Way, The Way of the Pilgrim (available in our bookstore), and books by Father Anthony Bloom (Living Prayer, Meditations on a Theme, and God and Man).

Today Thaddeus lives in Indianapolis and is a member of St. Paul The Apostle Evangelical Orthodox Church in Greenwood where he serves as an ordained deacon.

He participates in a men’s Bible group and the “Seasoned Friends,” a Bible study for senior citizens. His informal adult education continues through participation with a Henry David Thoreau Discussion group.

You can find Thaddeus in our bookstore every Wednesday, on occasional Saturdays,   and on Thursdays when Mother Macaria needs help unboxing orders that have arrived. She refers to him as “probably the most helpful soul I know.” He also willingly fills in when another volunteer is sick or out of town. We titled this article “Faithful Volunteer” because in the 23 years he has worked in the bookstore, Thaddeus has only missed two days, and those because he was very sick.

Thaddeus – we appreciate you!

Writer Anna Glass is a member of Joy of All Who Sorrow. You can reach her at annetteglass03@gmail.com. Submissions to and ideas for the blog are always welcome.