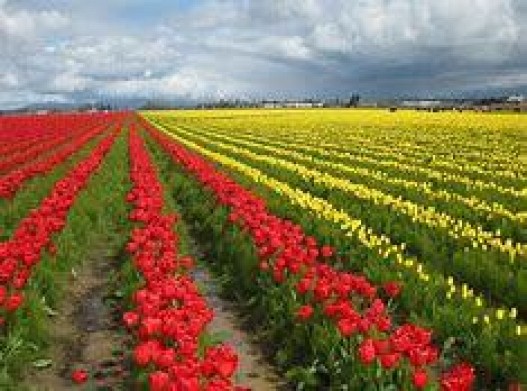 This story was originally posted in our blog in 2018. Keep reading though, there’s a 2020 update at the end.

My family lived in Holland when I was a child and my memories are mostly of flowers. Every home had a garden replete with blooms of many varieties but all included tulips. We took long drives into the countryside to entertain ourselves on weekends and I was mesmerized by the miles and miles of rows of tulips. First one color and then another. Rows and rows, not unlike the way you drive past rows of corn in the Midwest United States – only the tulips were shorter, and you saw past the rows in front of you to the expanse as far as the eye could see. Whenever life was troubling I went outside and looked at flowers – they were a comfort to me.

Later we lived in Virginia and I begged my father to let me plant tulips in our yard. Not wanting to allow me to disturb his carefully plotted landscape he had created, he finally relented and assigned me a spot by some trees in the back. The spot could not be easily seen from the sliding glass back door, so the view of his landscape was not ruined, and I could have my tulips. I planted six bulbs that November – that’s all he would allow. And in the spring, on my birthday, they bloomed. I was thrilled. To me it was a gift from God. Tulips on my birthday! And for the next seven years those tulips bloomed each year on my birthday – a loving gift from our heavenly father. It was an encouragement – no matter what was going on in my often-troubled life, the tulips were an annual message of comfort. In my forties I worked for an elected official. It was a high-stress job with little comfort. One year though, our boss suggested that we order office flowers for Valentine’s Day. My co-worker ordered the flowers and two days later a box arrived. Tulips! She did not know about my love of tulips, but she had ordered three dozen of them. We put them in the vase and watched as they slowly moved from one position to another. It was barely discernable, but we came to understand why tulips are called “the dancing flower.” In the grips of a hectic schedule and the multiple demands of the job, tulips again provided comfort.

Years passed – I continued to love tulips, especially red and yellow. Later in life, just over three years ago, I moved to Indianapolis and became part of the community of Joy of all Who Sorrow. I have never regretted it but an occasional doubt creeps in. Do I really belong here?

I was walking to church during my first spring here and caught a vision of red out of the corner of my eye. Tulips! Instantly I knew God was reassuring me. There were tulips scattered along my three-block path to the church as if to say, yes – you belong here – and providing comfort for my brief doubts. And they have been there every year since then – my comfort from God.

This May is the fifth anniversary of my baptism into the Orthodox Church. In June I will have been here at Joy for six years and each year the number of red and yellow tulips along my path to church has multiplied. Now, in the Spring of 2020 I would not get to see them. I’m keeping the quarantine – staying in my apartment because of the coronavirus. Sigh. I wondered if the tulips were blooming. I would miss them.

One afternoon I made my way out to the dumpster behind my building to throw my trash away. On my way back in I glanced to the left along the wall where flowers are planted each spring. There they were in the middle of a long patch of soil – red tulips! My heart skipped a beat. I gasped. Where had they come from? To have tulips in the spring, they must be planted during the preceding autumn. This flower bed on the wall had never had tulips in it before. The annual spring flowers had not been planted yet. I am convinced that God moved on someone to plant those tulips there last year because He knew. He knew I would need comfort during my lockdown in this building. He knew the tulips would speak to my heart and reassure me that I was where I belonged. He knew.

Writer Anna Glass is a member of Joy of All Who Sorrow and serves on the Parish Council. She can be contacted at annetteglass03@gmail.com.