The subtitle of this Orthodox Kypseli publication is “Life, Miracles and Spiritual Counsels of a Simple Priest of Our Days.” While this village priest may have been “simple” in terms of formal education, his spiritual knowledge was truly astonishing.

Fr. Dimitri was born of poor parents in Asia Minor; he became a shepherd when he was fifteen. From that time his life was immersed in spiritual warfare; the demons assailed him by temptations, fearful appearances and overt assaults. He kept icons in his hut to help ward them off, and particularly supplicated the archangels for protection.

He joined the army at age nineteen, and was involved in heavy combat in the Greco-Turkish War. He narrowly averted slaughter when he and two comrades were attacked by a large force of Turks; he miraculously survived, and managed to escape to Greece.

In 1924 he was discharged from the military with honors. Over the next few years he completed sixth grade, spent a few months of seminary, and was married. In 1931 he was ordained a priest; as was typical for rural clergy, he worked as a farmer and raised a family while he served the church.

It wasn’t long before Greece was immersed in WWII. During that time his village was occupied by the Italians; at one point his prayers saved the villagers from a great slaughter. Later the German army arrived, and he talked them out of doing any harm.

The Greeks were afflicted by Communists after the war; these presented themselves as nationalists, proclaiming patriotic slogans and masking their aversion to the Christianity.  Initially Fr. Dimitri supported them; but the archangels—who had always helped him—began to drive him out of his own church, making it very uncomfortable for him to be there. One day during a service he realized his error, and vowed to denounce the movement. He did so the face of great opposition; at one point his own wife tried to convince him to support them; and some of his fellow priests, too. But he continued his bold proclamation: “Communism abolishes Church, family and fatherland.” 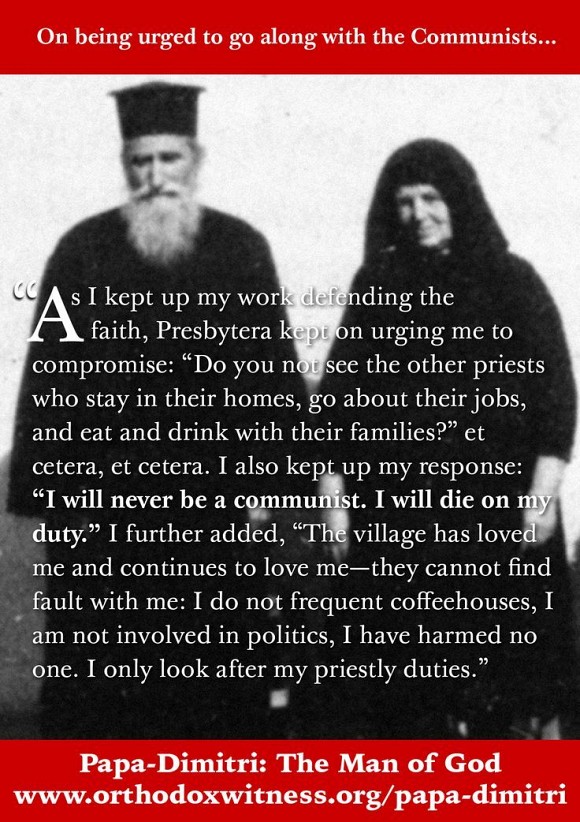 He was persecuted greatly for this, and went through trials most of us can hardly conceive. He was sentenced to death by the Communists some four times; he was chased by wolves, pursued by sheepdogs, stoned by a shepherd who thought he was a wolf, and barely averted starvation. At one point his cassock was pierced by Communists’ bullets, but none of them touched his flesh. He continued in unceasing prayer, and frequently performed the Paraklesis service.

Papa Dimitri remained immersed in spiritual warfare even after the Communist threat passed in the late ’40’s.  He was party to many “miracles,” and the Theotokos appeared to him as he was struggling to rebuild a church.  His final struggle was a bout with cancer, which was quite painful; he reposed prayerfully and peacefully, blessed by God, in 1975.

This book is mostly based on Fr. Dimitiri’s own autobiographical notes, but some spiritual writings of his are included too. One fascinating section (p. 95) deals with demons.  He noted that they are present even during church services, attempting to distract the faithful; but that they are are forced to flee during the Great Entrance of the liturgy.  Only Lucifier himself can enter the sanctuary…in fact, one time he literally tried to strangle the priest! Yet, Satan himself is afraid of the “pure and sincere confession,” and none of us need fear any demon, as their only power is that of tempting us. A wonderful extra included in this volume is an epilogue written by Elder Emilianos of SimonoPetras, who knew Papa-Dimitri. Elder Emilianos comments that those who met this priest were transformed, burnt by the fire of God (p. 128); he was truly a “man-maker.”

That title, perhaps, could be applied to any saint.

The translation of this book is adequate, and it includes a few photos.  I would recommend it quite highly.

Let us mark those who live such lives (Philippians. 3:17); let us remember those who make us men.

Papa-Dimitri, The Man of God is available in our St. Seraphim Bookstore.

This book is also recommended by Mother Macaria who says, “It’s an easy read and it shows that amazing miracles occur even in our time.”

Writer Randy Hay is a Subdeacon and Bible Study teacher at Joy. He is an Occupational Therapist as well as a published author. His book From Liz to Eternity (an Orthodox romantic comedy) is available in our bookstore.