Saint John of Kronstadt, born as Ivan Ilyitch Sergieff, the son of poor peasant folk, was born on the 19th of October 1829 in the little village of Soura, in the province of Arkhangelsk in the far north of Russia. His parents, poor and simple though they were, took great pains with his education, both spiritual and temporal. From school, where he had gone to the top of his class, he went to the seminary. From there he was sent in 1851, at government expense, to the Theological Academy of Saint Petersburg. While he was there his father died, and it was with great thankfulness to God that he accepted the post of registrar.

Having considered becoming a monk, and going to eastern Siberia as a missionary, he came to the conclusion that there were many people around him as unenlightened as any pagan, and he decided to work for their salvation, after a dream in answer to prayer, in which he saw himself officiating in some unknown cathedral.

Soon after completing his studies he married Elisabeth, daughter of the Archpriest K. P. Nevitzki, and he was ordained priest in December 1855. Appointed as assistant priest at Saint Andrew’s Cathedral, Kronstadt, when he entered it for the first time he recognized it as the church he had seen in his dream; and there, first as curate, and afterwards as rector, he served throughout the fifty-three years of his ministry. Cherishing a lofty ideal of the priestly vocation, he continued nightly to study and pray that he might perfect himself in it, while during the day he devoted himself to the many poor of his parish.

Father John, whose predecessors, apparently, had hardly even dared to penetrate the worst parts of 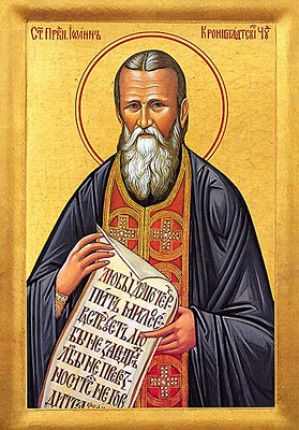 the town, spent much of his time there, striving to heal bodies and souls alike, attracting to himself first the children, and then, through them, their parents. Often, he found no time to eat until the late evening, and even then, he would sometimes be summoned out again, and not return before the small hours; he gave away his own shoes, he gave away the housekeeping money: his wife gradually accustomed herself to it, and finally became something like his keeper.

In 1857 he was invited to teach the scripture in the municipal school at Kronstadt, and he accepted with joy, for he loved children, and always took great pains with them. When his fame had spread, and he was constantly visiting Saint Petersburg, then to his own, his colleagues and pupils great regret, he was forced to abandon his teaching post.

Another object of Father John’s concern and labor was the removal of the widespread poverty that afflicted Kronstadt. At first, he gave these beggars money for food and shelter, but he soon came to see that this was not merely useless, but positively harmful. In 1868 he conceived the idea of founding a House of Industry, comprising a number of workshops, a dormitory, a refectory, a dispensary, and a primary school. He formed a committee and appealed for funds. His appeal was answered by rich and poor from all over Russia, and the House of Industry was founded in 1873. Father John administered a total of over $25,000 a year in numerous charities, half of it in Kronstadt.

Testimonies of Wonder Working
“My sister and I were often in the Working House, playing with the children of those who worked there. But Mother did not permit us to enter the rooms of the visitors. Two ladies arrived from Siberia, or from the Urals, both very wealthy. They owned some sort of factories over there, but I cannot remember now. The ladies took a liking to my sister and me at our encounter with them in the garden and hallway, and they dragged us into their room. Soon the ringing of bells announced Father John’s arrival. At the request of the newly arrived ladies, Father said a Moleben; one of the ladies gave Father a parcel of money. He declined to accept it: ‘Take it back,’ he says, ‘you will find it useful yourselves.’ The lady began to assure him that to her the amount was so insignificant, there was no need even to discuss it. Father John did not take the money anyway. That very evening a telegram was received, announcing that all the factories and house had burnt down, and this parcel of money was useful to the bankrupt wealthy ladies for their return journey…”

“The sister of the Russian consul in the town of Kiahta (on the Chinese border) was suffering there for a long time and very gravely from a serious ailment, from which, apparently, there was no hope of ever recovering. The malady was so severe that the sufferer was even thinking of poisoning herself, and so, under the influence of this terrible thought, she sees a dream. She sees herself on the edge of a dark and horrible abyss, would have liked to step away from it, but some fateful force pushes her forward and drags her into the chasm, from which there is no escape and where death inevitably awaits her. Horror envelops the sufferer, a cold sweat stands out on her face, her heart palpitates from mortal fear, the ground shakes under her, she feels her feet slipping to the very edge of the bottomless pit, over which is spread an evil darkness, while in its depths an entire hell is bubbling and boiling. Finally, she loses the ground from under her feet and her body hangs in space, ready to plunge into death’s embrace, which has widely opened its extended jaws. There appears to be no salvation; the last thought which flashed through her consciousness was of the Savior, crucified on the Cross. At the same time, as if in the clouds, a priest appeared in front of her, with the stamp of meekness and mercy on his brow… ‘In the name of the Savior life is being granted to you,’ he said, and, grabbing her with a mighty and firm hand, again put her on firm ground. He then showed her to a hitherto unnoticeable path, by which she could get away from the chasm, and guided her with these parting words: ‘Go and give thanks to God for the salvation you have been granted!’ Upon awakening, the sufferer told her brother and all her near ones about her marvelous dream, during which she described in detail the priest she had seen in her dream, whose appearance had become strongly impressed upon her imagination; as to who the priest she had seen might be, to this question no one was able to provide an answer.

“Some time elapsed after this dream; all who heard about it had forgotten it, but then even the sufferer herself thought less and less of it, although she did keep hidden in her heart the conviction that her prophetic dream had to have some special significance, And suddenly, completely by accident, she came to see a picture of Father John of Kronstadt, about whose outward appearance she had no idea to that time, although she had heard much about him, for the whole of Russia was filled with news about him. Just imagine her amazement and that of her relatives when she recognized in the picture of Father John the very same priest who had saved her from peril in her dream. She immediately wired Father John in Kronstadt, asking his prayers and intercessions before the throne of the King of kings. Father John did not delay in carrying out her request, served a Moleben for her health, of which he advised her in due course. From that time, the incurable sickness, which threatened the sufferer with inevitable death, took a turn for the better, and in a short time the patient completely recovered. She was so grateful that, upon recovering, she was not afraid to undertake a distant, long and difficult journey and, together with her brother, came from Kiahta to Kronstadt so as to personally thank the kind pastor, who had besought a cure for her with his prayers.”

This was one example of the many times Father John appeared to gravely ill people and prayed for them. It wasn’t until after they recovered that they discovered that the priest who visited them in an apparition was actually Father John.

Quotes reveal his wisdom
“Remember that God, during your prayers, is watching for your affirmative answer to the question which He is inwardly asking you: ‘Do you believe I am able to do this?’ To which question you must from the depth of your heart reply, ‘Yes, Lord’”

“When you are subjected to the malicious and furious violence of the passions, and to the harassments of the Devil, during the fulfillment of various works for God, accept these sufferings as sufferings for the name of Christ, and rejoice in your sufferings, thanking God; for the Devil is preparing you, without knowing it himself, the most shining crowns from the Lord.”

“Do not lose your temper with those who sin. Do not have a passion for noticing every sin in your neighbor and judging it, as we usually do. Everyone will give an answer for himself before God. Especially, do not look with evil intention on the sins of those older than you, with whom you have no business. But correct your own sins, your own heart.”

Lastly, a prayer we all can use:
“Grant me to glorify Thee, loudly, loudly in this godless world.”