Joy of All Who Sorrow Orthodox Christian Church received a Historic Preservation Education Grant to fund a series of four videos that showcase the restoration projects that have been accomplished in our church. The project is called, “Expressions of Joy,” and our first video is, “The Joy of Stained Glass.” This is the public release of that video.

The Augsburg Cathedral located in Bavaria, Germany contains what are arguably the world’s oldest stained glass windows still in place. Experts debate their exact time of creation, ranging from 1065 (the year the church was consecrated) to the mid twelfth century. In either case, the windows are around 1,000 years old and have withstood storms and wars, with only minor restoration done in the seventeenth century.

The windows feature not birds and flowers, but five Old Testament figures – Moses, David, Daniel, Hosea and Jonas. (Daniel is in the photo to the left). They were crafted by monks from the Abbey of Tegernsee. Other windows, done in a similar style, exist but are not in their original locations; they can be viewed in museums. The frequent use of biblical figures earned the name “Poor Man’s Bible,” as many were illiterate during this time and the window illustrations helped to teach and learn Bible stories.

What is “Stained Glass”?
Until the modern age, the term has been applied almost exclusively to the windows of churches, mosques and other significant buildings. Now the term can include three-dimensional structures, sculpture, and objets d’art (think Tiffany lamps).

We usually think of colored glass made by adding chemicals to molten glass, but the colors can also be painted on the glass and then fused in a kiln. The two most interesting color origins are yellow and red. Yellow used to be made by adding powdered uranium to molten glass. Uranium, being radioactive, causes the glass to glow under a black light. Known as “Vaseline Glass,” it can still be purchased in antique shops. Older red (or pink) glass is more valuable than other colors, as it was made by adding powdered gold.

Windows (or other objects) are created by arranging small pieces of glass to form patterns or pictures, which are held together (traditionally) by strips of lead and supported by a rigid frame. Complete books have been written about the craft of stained glass; for our purpose we will hold with this simple explanation. 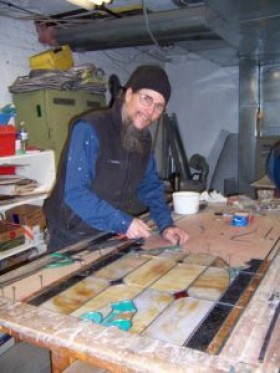 Restoration v. Repair
In repairing stained glass, any suitable materials can be used. However, when restoring stained glass it is important to maintain the historical integrity of the window by using traditional materials and techniques. The Preservation and Repair of Historic Stained and Leaded Glass is a restoration brief published by the National Park Service for the Department of the Interior. It provides historic preservation standards and guidance on preserving and rehabilitating historic buildings.

Below is the link to our video, “The Joy of Stained Glass.” It features Father Deacon Michael explaining the process that was used to restore many of the stained glass windows in our building.

Part of the grant process is to collect comments from those who have viewed to video. Please help us fulfill our obligation by sending your comments on the video to annetteglass03@gmail.com.

Link to our video:

This program has been made possible through a Historical Preservation Grant from Indiana Humanities, Indiana Landmarks, and the National Endowment for the Humanities.

https://www.scottishstainedglass.com/religious-stained-glass/the-history-of-the-worlds-oldest-antique-stained-glass-windows/ This site also shows all five of the Prophet windows at the Augsburg Cathedral

https://www.nps.gov/tps/how-to-preserve/briefs/33-stained-leaded glass.htm#history This is the site for The Preservation and Repair of Historic Stained and Leaded Glass. It includes a picture of the anatomy of a leaded window.

Anna Glass is a member of Joy of All Who Sorrow. She serves on the Church Board and the Capital Campaign Steering Committee.