Séances, astrology, Ouija Boards, palm reading, Tarot cards, and more – all attempts to circumvent God and find knowledge through the dark side. And despite the many warnings in scripture against such things, we are often tempted to dabble in one or more of these. “Just for fun,” we tell ourselves, “It’s harmless.” Some serious practitioners might even find real power through these methods. However, a desire for power beyond God is exactly what Lucifer sought – do we really want to join him? 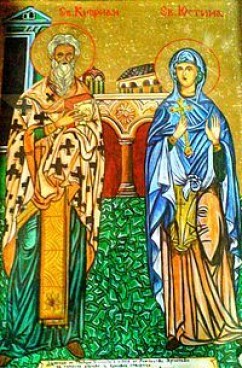 This week we recognize Saints Cyprian and Justina whose story gives one of the fullest accounts in Christian literature of sorcery and its power over men. This story is based on the first-hand testimony of one who was a leading servant of the demons himself.

Cyprian lived in Antioch during the reign of Decius (249-251 A.D.). His parents dedicated him to the service of the pagan god Apollo. He studied sorcery and demonic wisdom and was then sent to Mount Olympus, where he developed and practiced evil, dark arts. His studies could be called a “ruinous wisdom,” diabolical activity filled with evil, not fit to be mentioned here.

At the age of fifteen, his lessons became more specific and he learned from sorcerers of high standing. He moved to Argos to serve the goddess Juno and learn deception, to Taurapolis to serve Diana, to Sparta, and then to Egypt. At thirty, he went to the Chaldeans, where he studied astrology. He also practiced human sacrifice (murder). His resume could have read, “Sorcerer, magician, and destroyer of souls.” A wise man would recognize him as a slave of Satan.

Justina, the grown daughter of pagan parents, one day heard the truth of the gospel from Praylius, a deacon passing by her window. She secretly started going to the Christian church and became a believer. Soon, she led her parents to accept Christianity as well. All three were baptized.

Aglaias, a young man in the area, was smitten with the beauty of Justina and tried to woo her. She replied that Jesus was her bridegroom and she was interested in no other. Aglaias decided to take her by force, but his attempt to rape her failed as Justina’s screams brought the neighbors to her rescue. Aglaias then turned Cyprian for help through the dark arts. Cyprian, who had performed astonishing feats, decided it would be an easy task to turn the heart of Justina to love Aglaias. Cyprian called Aglaias and sent him to sprinkle the house of Justina secretly with a powder provided by a demon.

As she began her nightly prayers, Justina was moved with a temptation of lust. Recognizing that it was an attack of the enemy, she spent a long time in fervent prayer, making the sign of the cross and asking God to grant her victory over the evil desire of her flesh. God gave her the victory and Justina glorified God and sang a song of victory. Having failed in this attempt, Cyprian (filled with embarrassment and rage) followed with many more. He sent demons to Justina, he sent disasters to her family and all the neighbors. He tried every evil trick and incantation he knew, sending plagues and sickness through the town. The most important citizens went to her and asked her not to grieve Cyprian any more. She responded with fervent prayer to God. Immediately all the demonic attacks ceased; all were healed from the plagues and recovered from their diseases. The people glorified Christ and mocked Cyprian and his sorcerer’s cunning, so that from shame he could not show himself among men and he avoided meeting even friends.

Cyprian became convinced that no evil power could overcome the sign of the cross.
Speaking to the evil one, Cyprian said, “For if you fear even the shadow of the cross and tremble at the name of Christ, then what will you do when Christ Himself comes to you? If you cannot conquer those who sign themselves with the sign of the cross, then whom will you tear away from the hands of Christ? Now I have understood what a non-entity you are; you are not even able to take revenge!”

With repentance and tears, Cyprian took all his books of magic to the Bishop to be burned. After much instruction in the holy faith and seeing evidence of true conversion, the Bishop baptized Cyprian. In thanksgiving, Justina gave alms and an offering to the church. Eventually Cyprian became a bishop. By his conduct and instruction, he converted many pagans who then became members of the church. Idol worship began to die out in that land, and the glory of Christ increased.

Icon is from Bulgaria and was copied from https://en.wikipedia.org/wiki/Cyprian_and_Justina

Anna Glass is a member of Joy of All Who Sorrow. Please send comments on or submissions for this blog to her at annetteglass03@gmail.com.