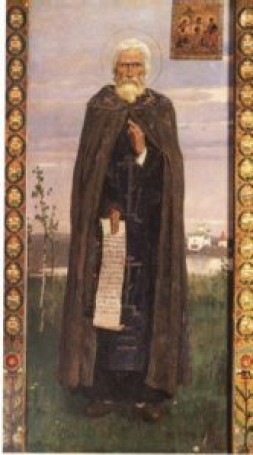 When Sergius of Radonezh (known as Bartholomew before he became a monk), was growing up, his ability to learn did not match that of his two brothers. Then one day he met an old monk who, after Bartholomew explained his difficulties, gave Bartholomew a small piece of communion bread with the blessing, “Take and eat it, this is given to you as a sign of God’s grace and for understanding of the Scriptures.” From that meeting on Bartholomew found his lessons easier.

In 1337, Bartholomew was tonsured a monk with the name Sergius and was ordained to the priesthood. He established a monastery and his disciples went on to found more than 400 monasteries. Metropolitan Alexis of Moscow entrusted him in the tasks of reconciling differences among the princes of Moscow and Russia. Sergius was deeply humble and had a staunch faith in God’s help.

Sometimes, in our amazement at the lives of saints, we forget that we can also benefit from a staunch faith in God’s help. Case in point: Janice, a custodian in a government building, was trying to pass a test to get her GED. While she did well in most sections, she failed the math section each time. In frustration, she asked a woman to tutor her. After testing Janice, the tutor discovered that she did well on all the math calculations – her problem centered on word problems. She recommended that Janice stop practicing math and, instead read the book of Proverbs for two months. Why? Because Proverbs was written, “To know wisdom and instruction, to perceive the words of understanding, to receive the instruction of wisdom … knowledge and discretion. A wise man will hear and increase learning, and a man of understanding will attain wise counsel, to understand a proverb and an enigma, the words of the wise and their riddles.” (From Proverbs, Chapter 1) Janice followed this advice and passed her GED test on the next attempt. She went on to become an Administrative Assistant with the state police.

In another case, a young mother was having trouble with her son not settling down to sleep each night. He kept getting out of bed and she was frustrated at attempts to solve this problem. Finally, she read a verse in Psalms that looked promising. Having trained her son in the importance of obeying God, she put him to bed that night and at his first attempt to get up, she explained that God’s word says, “I will both lie down in peace, and sleep; For You alone, O Lord, make me dwell in safety.” (Psalm 4:8). Her son looked at her and said, “Oh!” Then he climbed back in bed and stopped getting up at night.

Each example from the lives of saints and from our own lives, shows that God is close and has provided us with the help we need. What experiences have you had with God’s provision of wisdom?

Anna Glass is a member of Joy of All Who Sorrow. She hopes that you will share your story of God’s provision through this blog. Submit your story to annetteglass03@gmail.com